Currently I'm really into getting my hands on an R48-1000e3. Highly compact and even smaller than an Eltek Flatpack S. Unfortunately I wasn't able to find somebody that's willing to share the CAN protocol with me.. I read through the Eltek thread and I wish we can start something similar for these chargers?

Main CAN capabilities are: 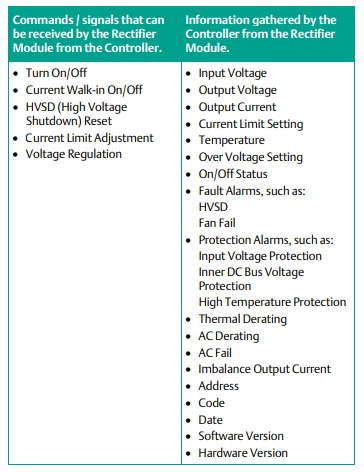 I found this article from the chinese Vertiv support about their own communication protocol. It's more general, but maybe has a few clues: https://wemp.app/posts/5804ee3c-dcfb-46 ... 9ba4bef84c

The first article hints, that even though the protocol differ, the content may be the same:

What protocol is your device using, is it RS232 or RS485? In fact, such a description is not correct. It only expresses the physical interface form used by the smart device to communicate with the background, and does not describe more content.

When we select the protocol on the device interface, we often see a YDN23 option. What does it mean? This article takes the general protocol of "Hipulse U Communication Protocol V150" by Vertiv as an example, so that you can have a further understanding of the background communication protocol, and initially have the ability to apply the text of the general electrical protocol to solve practical problems.