j bjork wrote: ↑
Mar 19 2020 8:41am
Were you (or someone else) able to find it or something simular?
I should soon have to modify 2 of these psu:s, it would be nice to be able to adjust them without the programming.

If you are having difficulty ordering it then you can use a third party service like Taobao Focus.
They will order it for you and ship it to you.
https://buy.tbfocus.com/item.php?id=565948826876
It's in English and they accept Paypal.

These ones, I didn't realize that it was still possible to buy from there still. Thanks eee291

I got the control boards today.
I went looking for a power supply for the board in the psu.
I found the fan had a steady 12,7v, I thought that would be perfect. 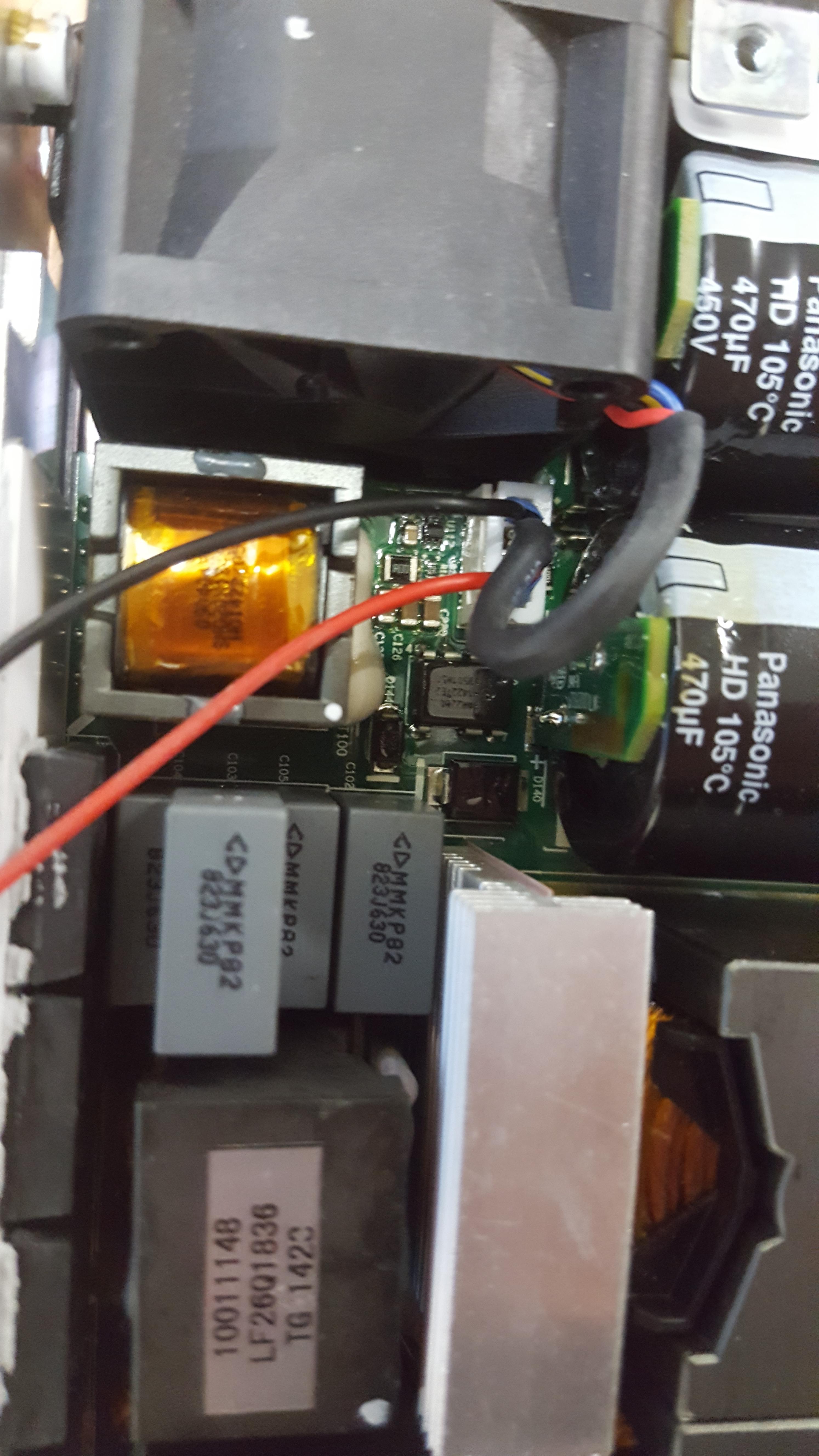 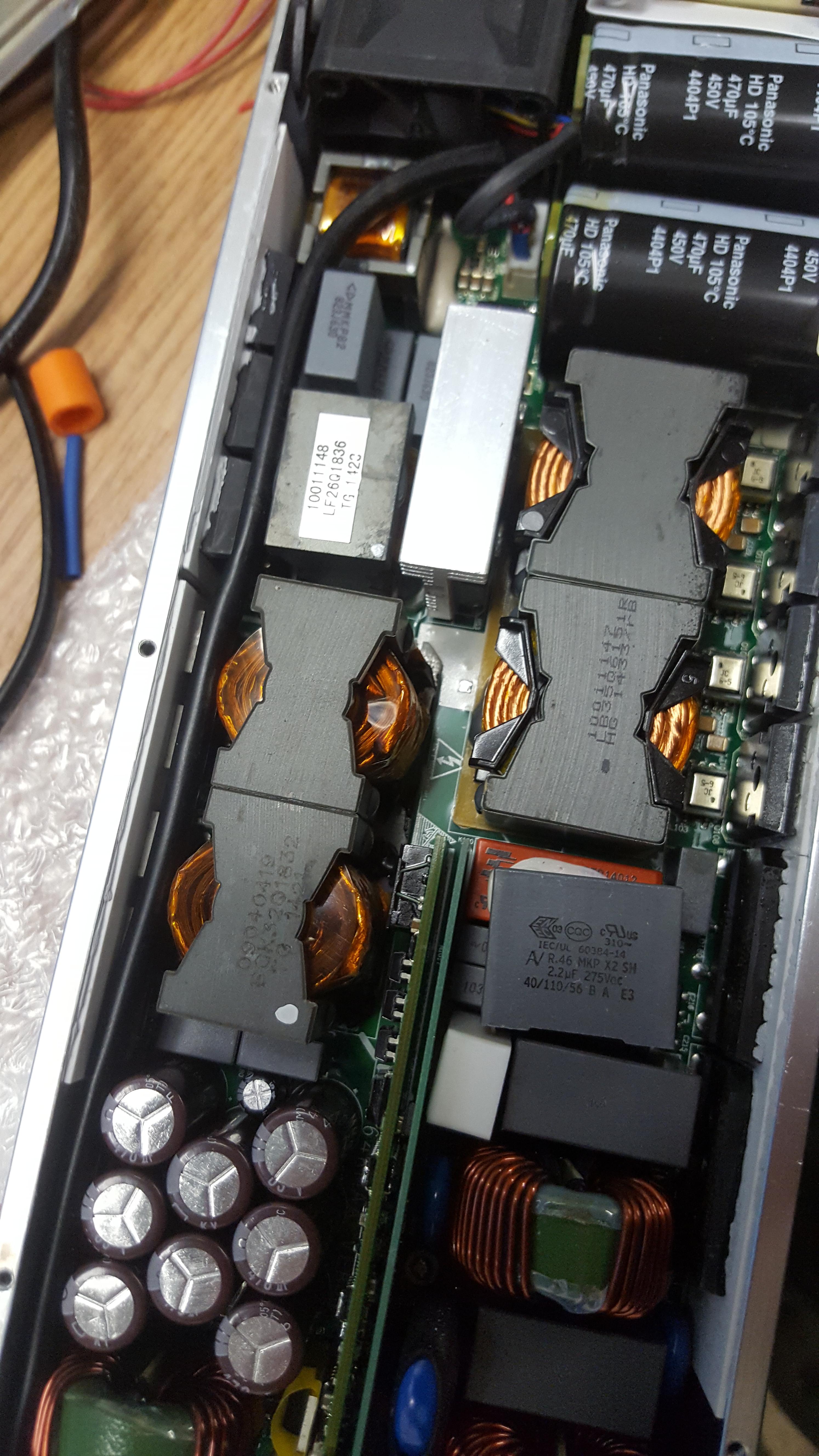 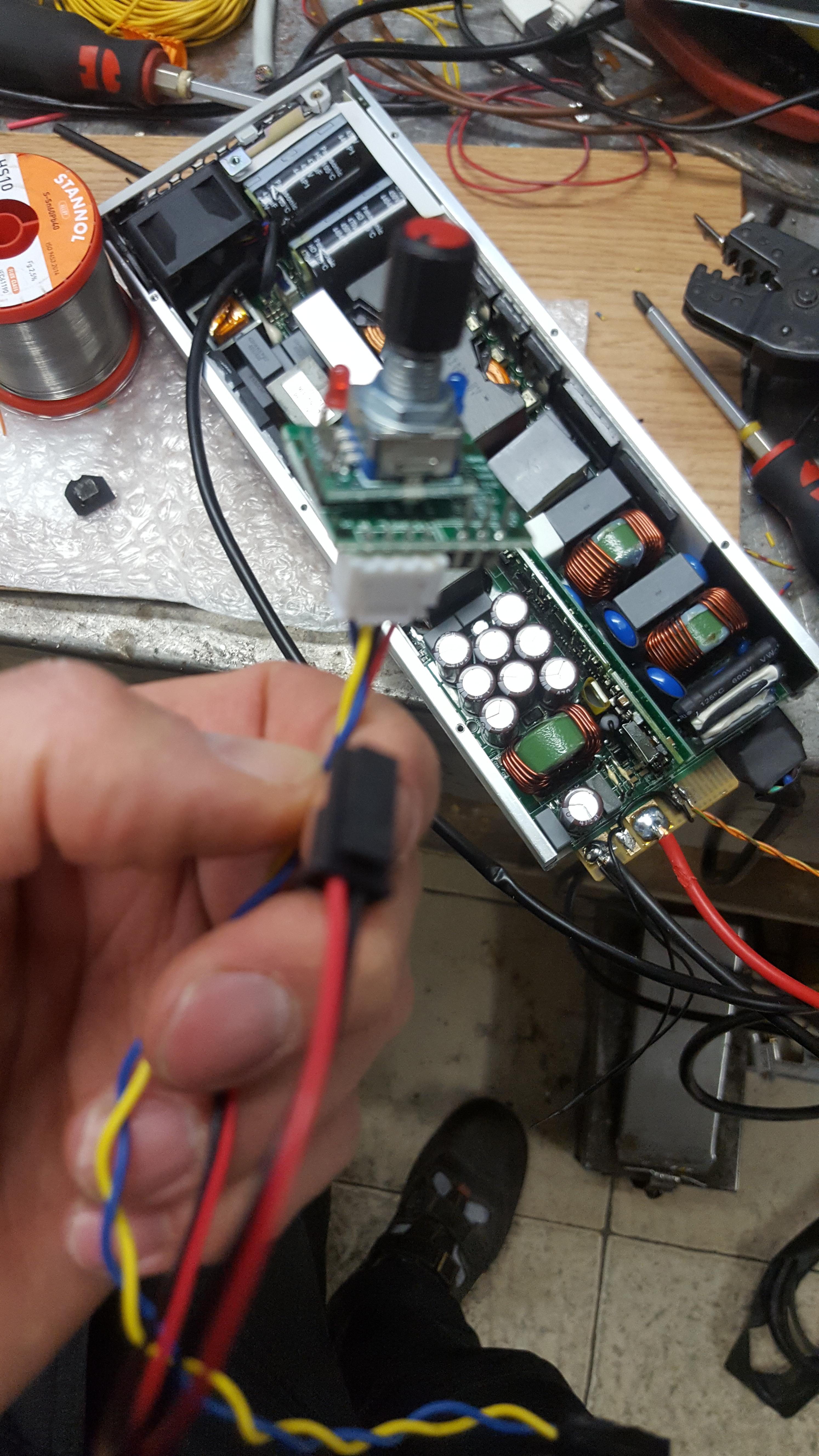 Well, I connected the board to the 12,7v. It seemed fine.The leds lighted up, it reacted when i clicked on the knob.
I tried connecting only can bus, seemed fine (no leds or anything, but it was not powered up)
When I connected both, bang. The fuse blew in the garage and everything. The psu died. One of the big mosfets exploded.

The control board also smell a little burnt, and there are a little discoloration on the contact housing.

Most likely the sections you connected with wiring to the add-on board were isolated in the PSU, and connecting them shorted things out.

You'd have to trace out and measure on a still-working PSU whether there are already connections between those sections, and if not, don't make any.
If you found this advice helpful, supporting contributions are accepted here.

If the bus is isolated from the other connections you have between PSUs, then it shouldn't be a problem.

If it shares the ground with the power output, then you could not put them in series and still connect it, because connecting the ground would short out the more negative PSU's output.

They could still be put in parallel, however.

If they are not isolated but you can use optoisolators on the bus, then you could connect them anyway.
If you found this advice helpful, supporting contributions are accepted here.

There are no connection between either positive or negative output and either of the can bus wires, so I guess it should be safe..
At the moment I am a little low on psu:s, so I cant really test

Luckily I bought extras of the control board.

It seems to work fine at adjusting the voltage output, (with an external power supply for the board) but I haven't really figured out how to set the default output(when the control board is not connected) It seems to have changed, I am pretty sure I had 54,5V before. But now I have 55,7V. Maybe it gets lower under load, but I am pretty sure it has been stable at the same voltage both with and without load before.

control boards
USB serial port cable
Huawei and Emerson's control board PCBA is the same, but not universal, the software communication protocol is different.
Top

BotoXbz wrote: ↑
Apr 01 2019 1:21pm
A little update on my PSU hacking attempts:
{snip}
Work in progress still, code on GitHub https://github.com/BotoX/huawei-r48xx-esp32
Using this lib for CAN on ESP32 https://github.com/sandeepmistry/arduino-CAN

I want to use the Huawei as a jump-start power supply for a 20kW flow-battery installation using Redflow ZBM-2 zinc-bromide units. I've got them in place, but COVID-19 has sabotaged the commissioning timeline. One of the peculiarities of a flow battery is that they can be (and in fact need to be for dendrite removal) fully discharged. From that state they need a 56V power supply at high amperage to get them to the point that they can be run normally, and I wanted to set up a Huawei rectifier on the DC bus to kick in if/when required under BMS control - whilst it is possible that the Sunny Island can do this, that is not yet clear.

Because a rectifier is inherently designed to operate in a n+1 environment with high reliability and life, it seemed ideal. But of course the controls are proprietary. I decided to build a CANBus unit in the hope that I could set the voltage and current limit permanently with a view to using the rectifier under BMS control using dry contacts.

Originally I purchased an Arduino UNO and CANBus shield plus a couple of MCP2515 cards (cheap as chips) but actually implementing a CANBus tool from the tools and code out there turned out to be a lot more difficult than I thought. Plenty of mickey-mouse demos which will turn an LED on on a receiver when a transmitter is actuated, but functional transceivers either relied on obsolete and withdrawn software, or were firmly oriented to vehicles, and as this appears to be a lucrative market, pried accordingly.

As I also had a an ESPDuino clone I was seduced by BotoXbz's solution. So here are a few errors I made en route: Note that mose ESP32 boards are 3.3V, and do NOT require a CANBus chip - just a driver. I ended up cannibalising an MCP2515 (which is 5V) by stripping the CANBus chip and strapping to the driver. Messy, but cheaper - plus it saved my waiting three weeks for a part.
When I first looked at BotoXbz's code I despaired - how did the bits fit into an Arduino code space? The answer is that they don't. I installed PlatformIO, whixch is "Open source, cross-platform IDE and Unified Debugger. Static Code Analyzer and Remote Unit Testing. Multi-platform and Multi-architecture Build System", but the big-ticket items are that it allows the use of multiple types of card, allows a GIT source to be utilised as-is, and provides all the tools you need - for free. I cannot emphasise how gob-smacking it is to use an open-source tool like this - when I was in my first job (in the seventies) I was working with UV-erasable eight-bit processors for a PABX line card, and the hardware and software tools needed were pricey, clumsy and proprietary. This is my first time playing in the software pond since that design (by the way - a lot of engineers thought it insane to have an eight port line card design with nine microprocessors

Suffice it to say (and to my complete amazement) the GIT transferred smoothly, the code assembled and transferred, and after a hiccup with swapped CAN-L and CAN-H I was able to talk to the Huawei.

I used a connector, rather than soldering to the edge of the PCB.

j bjork wrote: ↑
May 14 2020 11:24am
There are no connection between either positive or negative output and either of the can bus wires, so I guess it should be safe..

There is a 5kV isolator in the Huawei, so multiple CANbus connections can be made in parallel - it's a differential transceiver, so neither leg is earthed. You should aim to have two 120 Ohm resistors in parallel with the bus to suppress reflected signal interference; one at your transceiver, the second at the furthest Rectifier. Keep stubs short; ideally just tap into the bus at each rectifier.
Top

j bjork wrote: ↑
May 14 2020 11:24am
There are no connection between either positive or negative output and either of the can bus wires, so I guess it should be safe..

There is a 5kV isolator in the Huawei, so multiple CANbus connections can be made in parallel - it's a differential transceiver, so neither leg is earthed. You should aim to have two 120 Ohm resistors in parallel with the bus to suppress reflected signal interference; one at your transceiver, the second at the furthest Rectifier. Keep stubs short; ideally just tap into the bus at each rectifier.

It sounds as though he has intended the controller for use with a single rectifier, which means that the leads are very short (as per photos), which means that he could get away with consolidating the two parallel 120 ohm resistors in a single 60 ohm.

If you are using multiple rectifiers then there needs to be a variation in the code to select and communicate with a specific rectifier - I can't imagine that they will all respond to commands together (in fact if they did, they would probably jam the bus). So multiple connection will probably require either a modified unit or a different controller. I would think that the rectifiers will recognise that there are others on the bus, and change their address on startup, but what I don't know about CAN protocols would fill an encyclopedia.

Short answer - if you fix the control issue and have longer runs, you will probably need to replace the 60 ohm with a 120 ohm and add a terminating 120 ohm at the end of the cable.
Top

Have you been able to set the default output of the psu?
My has changed to 55,7V after I have connected the control board.
I don't have the parts to connect it to the computer.

yes can be made default required voltage pcb control board ...
Top

How exactly you change the default voltage? Which tool to use?

is it possible to charge 20S battery pack and adjust current (depend of current needs?)

Hello Rigmo are you maybe selling any of those can bus controllers ?
Hello all sorry but i m new here i also have to get used to this kind of forum , search and answer systeem.
Top

HI rigmo
i have controller pmu 11a
but i can't connect to controller for change voltage
do you have WhatsApp or telegram for connect
Last edited by salavati05 on Sep 27 2020 8:40am, edited 1 time in total.
Top

hi rigmo
do you have this control boards?
i need this
please help me
Top
Post Reply
171 posts