I was thinking that if the magnet was further toward the outside of the wheel it came around slower, which I now realize was a very silly thought: of course one turn of the wheel is the same as one turn of the spindle. Previously, before I moved it back, I suppose with it so far away from the sensor it might have 'skipped' registering a revolution, but if that was the case, I should get lower speed readings, not faster.

So I guess I need to find another reason the speed display is out. It's pretty certain that when my display reads 34km/hr I'm actually going 30 or 31, and I can feel the PAS stop assist around 40 if I'm not mistaken, which in reality is probably around 36 and not 40. (I'll double check the wheel size in the settings, but I seem to recall when I went through them it had the right size set already).

Thanks for straightening that out!
Regards, John
Top

tsellers wrote: ↑
Jul 08 2020 12:27am
It's pretty certain that when my display reads 34km/hr I'm actually going 30 or 31, and I can feel the PAS stop assist around 40 if I'm not mistaken, which in reality is probably around 36 and not 40. (I'll double check the wheel size in the settings, but I seem to recall when I went through them it had the right size set already)

Does it just have a "26" or "20" or whatever size, or does it actually let you set the circumference in mm? If the former, the speed can be off by quite a bit depending on how different their tire size was than yours. If the latter, you can measure yours with a number of methods, with the tire pressure you acually use, and put that in, to ensure accurate readings.
If you found this advice helpful, supporting contributions are accepted here.

Thanks for the update. The display just offers the one setting of 27.5 for wheel size, and it cannot be changed.

In the winter when I was running the smaller studded tires, the speed seemed to be only out by 1.5km/hr. Now that I have the larger stock factory tires on, it seems to have doubled the error margin. So I guess I'll have to run on bare rims to get an accurate speed!
Regards, John
Top

I'll check the Besst settings and advise how it is configured.

Not much you can do about that without some electronics between the speed sensor and the controller.

If you wanted to, you could make something with a small MCU, maybe atttiny, etc., that you program with the ratio of your actual tire diameter vs the calculated diameter it's using (the difference between your actual wheel speed and what it thinks it is), and it applies that to the pulses coming in from the speed sensor and calculates the pulses to send to the controller to give the corrected speed reading. It would probably take a few to a few dozen pulses to do it, so it may not be quite realtime, but it will be close enough except at really low speeds.
If you found this advice helpful, supporting contributions are accepted here.

Thanks guys for the help!

So the "wheel size" is a drop down selectable,

If my impression from other threads is correct, that software and cable (not the same cables as the BBSHD, etc., motors) is not available in the public domain for the M600?
Regards, John
Top

Could somebody please share a complete scheme of all cables for this motor? Something like this: https://i.imgur.com/lcz7NIJ.png

If possible, I'd like to have a photo showing all cables and connectors that are included with the motor, since the only photo I could find while searching online is this small one posted here by an user: https://i.imgur.com/D1Ar1om.jpg
Top

No mention of a throttle and sent an inquiry because that is a must for me. Otherwise it seems ok and I prefer an alu frame over CF anyway. I have been riding mtb for 40yrs. and this would be all I'd need and probably more suspension wise as i only have a hardtail with an 80mm fork and 2 other rigid eBikes and I get around ok on them and the terrain close by.
Top

No pricing up front
Top

I've seen posts about the motor having a thermal limiter. Do you guys have any documentation regarding that? I live in the Philippines and weather here is 90F minimum almost all year round so I usually experience the motor power surging when doing extended steep climbs.
Top

should the small gear spin or not?
Top

Hey Luigi,
Suggestion: Enable 'Community contribution' on your video and that way Italian speaking members may be able to help translate the audio in your video.

I don't speak Italian, but he says 'problema scatto libero' which Google translate suggests means 'free snap issue'. It looks like the small gear must turn free, and is seized.
Regards, John
Top

I have an M500 unit that has failed. Here are the symptoms.
1. I used the BESST tool to perform a "position sensor calibration"
2. The motor spun inside but the wheel didn't turn. It stopped after a second or two
3. The motor now "free spins" inside with no power delivery to the output gear.

I think the position sensor calibration process spun the motor backwards or something. I have had the motor apart but nothing is obvious. But I cannot tell if a one-way bearing is letting go under load..

There is motor resistance when rolling the bike backwards as normal.

It would be good to "fix" this problem

hello Animalector
have you seen our video the gear turns in a free direction and in the other direction it drags the gear
if the one-way bearing (One-Way) is blocked, the gear drags in both directions.
The problem is found even when the bike is off, pedaling and the engine can be heard
Top

Gotcha.. so it is "Supposed to free spin one direction only, and drive the other direction." my behaviour is different. (I guess) I'll pull it apart again.

Position of Speed Sensor on your M600?

I have a question that perhaps other M600 owners can help with depending on what frame they have.

I received a Frey M600 V2 last year. The spoke magnet and sensor are located on the right side chainstay of the bike, same side as the cassette. This is what it looks like: 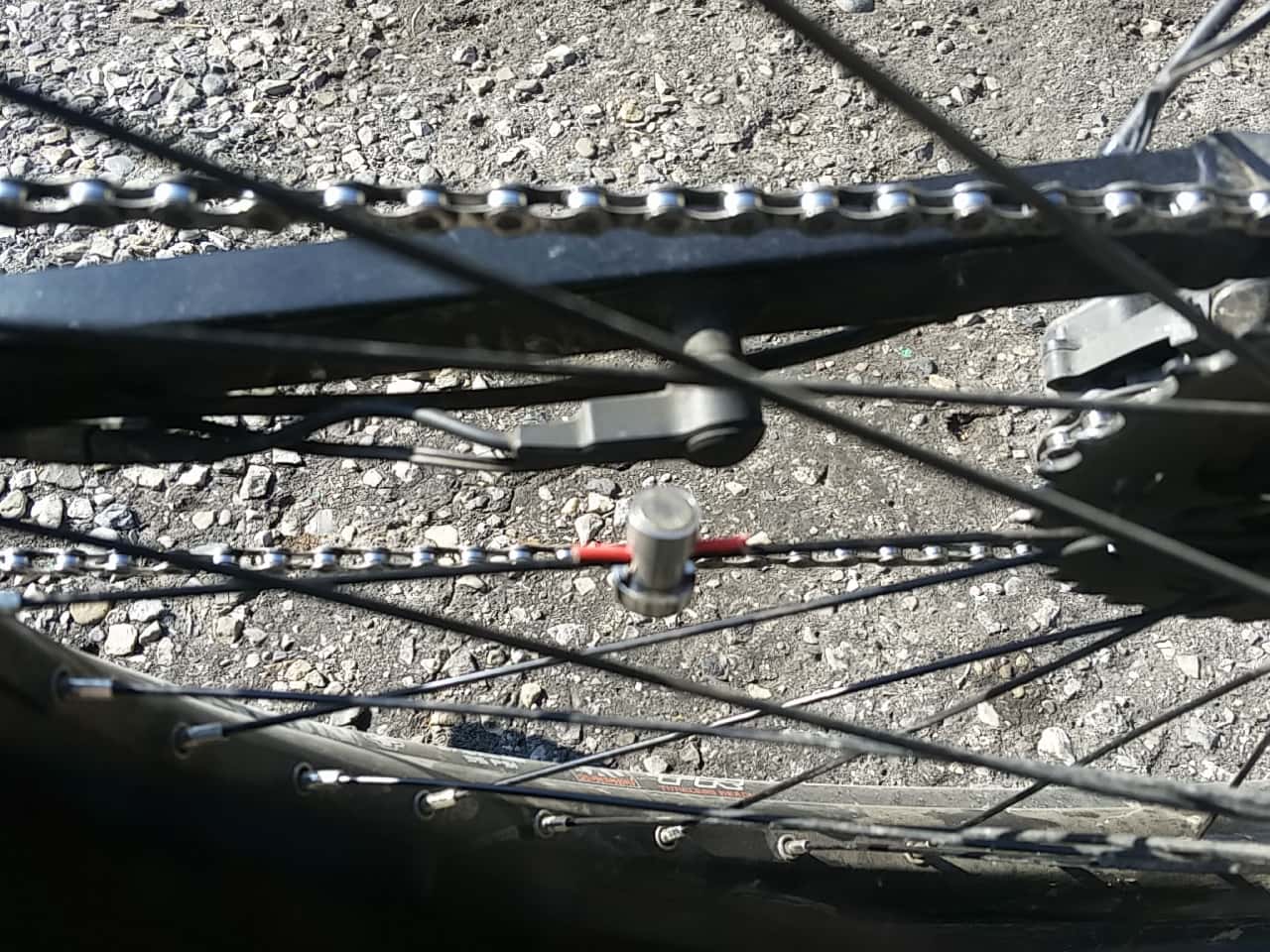 I've outlined this problem previously in the forum: The first time I shifted to the lowest gear, it brought the derailleur cage plate so close to the spokes that the cage plate caught the magnet, bending the spoke, the cage plate, and the hanger. After much experimentation, to make this work, I have had to mount the magnet almost horizontally, and add another magnet to it (as seen in picture above). I also had to replace the derailleur and hanger.

A couple of days ago we received a Frey EX and some CC bikes, and I noted the sensor is mounted on the left side chainstay on the side opposite the chain and cassette, which gives it ample room to avoid a collision with the cage plate.

This makes me wonder, did the Frey M600 I received have an anomaly in where the sensor is mounted? (I've asked our rep Grace at Frey for clarity on a few occasions, but got no answer to this particular issue). If not, then I can't figure out why other owners of this same frame have not reported the same issue?
Regards, John
Top

Another thing to check is to make sure that your limit screws are set on the derailleur correctly. In top gear, screw in the limit screw so that it still changes up into the top gear, but cannot move past towards the spokes.

Last option... relocate the sensor further towards the rim. This will move it away from the derailleur.
Top

Problem is, I probably need something like another 3mm of clearance.

For #2, my tolerances for that gear will not allow me to get what I need, I spent a fair bit of time tuning the limit screws and playing with them.

#3 would be a good solution. The sensor has a mount bracket welded to the chain plate that the mount screw goes into, so I'd have to figure out an alternative mounting method. I guess if I did that, then I could mount the sensor on the chainstay on the other side, which is what they've done with their newer models.
Regards, John
Top

#3.. a block of plastic with some cable ties should do it..
Andy
Top

I will explore that option.

I'm still rather surprised that there are no other Frey M600 owners that have been able to chime in with how theirs is setup. If all of this model of bike got shipped the same, there must be others that have had to deal with this as well.
Regards, John
Top

Can those with non-Luna M600 comment on torque sensing characteristics in PAS 1-2 of 5? Is is distinctly different than PAS 3-5 of 5? On my Luna X1 (non-ludi) there is a distinct change in torque sensing recipe below 50% PAS. Hardly any assist in PAS 1-2 unless you are really puting pressure the pedals and it cuts out mid cadence unless you apply constant pressure. Very annoying and not smooth at all. I find it unusable. In PAS 3+ it's fine, but almost too much power to get a good workout. I have not heard a lot of complaints from non Luna owners so I'm thinking it may be unique to Luna's tuning.
Top

M500 level 1 and 2 are just to overcome the weight of the bike. They feel like riding a normal bike.. very smooth power delivery good modulation and integration (feel)
Level 3 is where you actually notice the power bit still smooth and linear to the rider input. And this is like level 1 with the M600.. but the m600 is a little bit jerkier..

I want Bafang to develop a smart mode like Bosch... a logarithmic or exponential response factoring cadence as well... Hopefully this comes as a firmware update...
Top

Did anyone change the "silent gear"?