has anyone heard tried this kit before? http://cyclone-tw.com/order-3chain.htm
i'm referring to the first kit 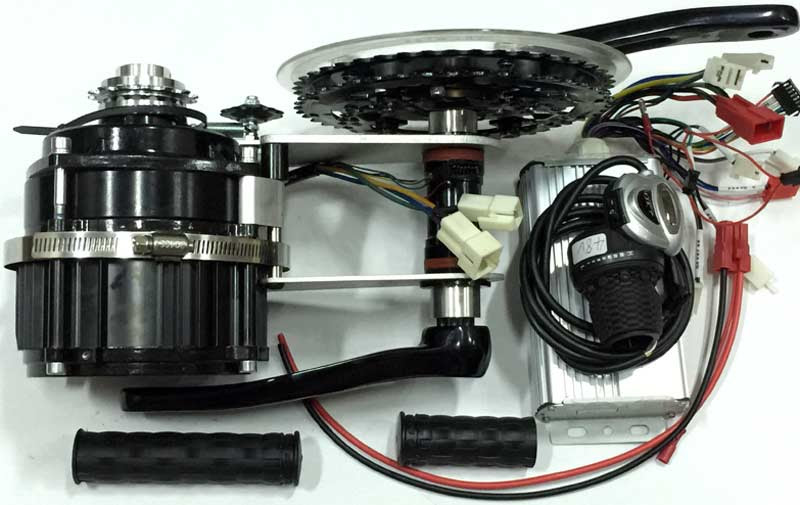 Yes, I have this kit and am currently running around 2600w at 55 volts. At that power level, there is very distinct flex of the brackets under hard acceleration. As a matter of fact, I have had them flex so much that the chain came off twice. On a positive note, that is 2 chain derailments over around 500 miles of usage so not terribly bad. The motor runs cool, as does the controller. I am a little fearful that if I was to mod the controller to allow higher current draw, the flexing would become a more prevalent problem. Most of my riding is about 50/50 between peddle assist and pure throttle.
Top

i don't run on running it any higher, how fast did you go without pedaling at that power level? are you saying 55 volts charge or nominal voltage

Without pedaling, I've seen a maximum speed of 35mph/56kph. My battery pack is a 14s10p pack which is 58.8 volts fully charged and between 52.5 -55 nominal. The controller is listed as a 40amp continuous and 100 amp peak capable. I use a PowerLog 6s meter to measure only 6 cells of my pack and I have seen 50amps peak current draw. I suspect that's the most i'll ever get out of my 18650 cells.
if you had a battery pack capable of 60amps or more, I'd guess the motor (and correct gearing) would push you over 45mph/72kph. My bike is on the ragged edge at 35mph and I usually ride below 30mph.
Top

How quiet is it with the plastic gears ?

i'd rather have a bunch of chains than plastic gears

Why so it can be noisy and catch on your pants ?

If these gears have been designed properly to suit the power 3kw then they should not fail and they should also be quieter then steel gears or steel chains. The Bosch and Bafang BBS02 is full of plastic gears. Internal planetary gearboxes are the most compact and clean designs compared to jackshafts with gears and chains flying around and look like something invented in the 1800's

The question is if they have been designed for 3kw ?
Top

The question is if they have been designed for 3kw

for something costs 30$? i'm not sure, look at all the options aft bring up from prolonging the life of the gearbox? and that's only for 1680 watts.

i currently own a gng 2015 and it's goes to around 52 kph at 48v nominal baattery at 1700 watts. pretty similar to this, it's usage is 25 wh/km (whats the usage on this i wonder). it works well now after i replaced the entire crank with my own spider.
it's casted jackshaft holder holds and doesn't bend. and that means that if could pull out the jackshaft from it you could replace it with something stronger, that would accept better freewheels and better 8mm chain rings.

the only thing i'm worried about in my gng is the motor's own driver sprocket, there doesn't seem a way to remove it (no key, no allen bolt) it doesn't seem to unscrew. the only way i can think about is it's pressfit into the shaft, or that pressfitted into part of the shaft that was later bolted though the brearings.
if could i could solve that mystery then i'm think i'm golden on all wearable parts.
even more, i may even be able to use a thun 136 mm bb on it, as it seems to have big clearance. unlike this thing.

actually i was these are the same motors

From my experience, the noise level is about a 6 out of 10. It can be loud under hard acceleration, but quiets down once up to speed. It's definitely louder than a hub motor (I also have a Yescomusa 1000w direct drive hub motor for comparison) but seems to be about normal for most mid-drives.
The pedal cadence varies since it's a mid-drive and can benefit from using 2 gears on the front and the full set of gears on the rear cassette. You can change gears to find a comfortable cadence. It has enough torque to run in just about any gear within reason.

It would be difficult for me to comment on power usage since I do a fair amount of pedaling. For example, I went 11 miles (17km) yesterday and only used 2300mah, which seems to be about 7wh/km. I probably pedaled about half the time. I'm also a heavier rider at 220lbs.

In my opinion, this kit is probably the cheapest way to get into the 2kw-3kw domain. There are much nicer kits, like the Lightningrods gear, and this kit is quite obviously sold to hit a low price point. But, for the price it's plenty powerful and relatively easy to install.
Top

i can't get l-r kit i'm probably the only guy he'll never sell it to, , i do have the prototype, (long story)

but from my short experience when it worked, it's usage was higher then gng 2015 (30 wh/km) but the most annoying part in it was the belt kept slipping if i tried going wot when the gears were in mid range, i had to keep reminding myself to lower the gears.

subscribed. I am also interested in this kit. sadly it came a month before I got my 2015ver of the gng gen 1 kit. so far, I trashed the new style freewheel crankset that they supplied. I'm using the old version now. the price is very competitive with the gng. hopefully we can see someone with an actual kit in use in their build with real world experience and not just speculations on how crappy they are from just looking at the store photos.

from what i can see at least form the brackets at the very least you'd need new ones or weld something in between from the l-r kit i had, it's enough these things might flex just a wee, you'll have an out of balance chain.
now i know they seem to have designed for it, (making the right one thicker then the left one ) but still , look at length they have.
plus i'm not sure it will out perform you current gng 2015 (and have easier parts to repalce like the freewheel and driven sprocket).
Trek 7.7 fx, 22.5" frame, 38x700c,10 gears.
ecospeed mid drive 1300 watt engine, max speed 45 kph.
battery1: 48v 14 ah, frame mounted battery, range 40km.
battery2(spare) 52v 10ah frame mounted bag, range, 30km.
Top


The question is if they have been designed for 3kw ?

another question, is your bicycle drivetrain designed for 3kw? lol I would worry about that more than the kit itself. I've seen these kinds of planetary gear box on passenger electric motorcycle that got a side car before, going up a hill with around 6 passengers... crawled slowly but it made it to the top. It's also used on motorcycle conversion. gng got longer motors with similar looking gear box on their trike/golf cart kits. then again the cyclone mounting hardware might not be rated for that power. so like high power GNG kits, a little fabrication is required. I'm interested in the performance on the usual 1kw-1.5 kw power level. if these works pretty good without modification, then this kit might be something good after all specially with the bafang BBS02 being more expensive and have interanl controller issues.
Top

might build another bike using this kit or if My GNG totally crapped out on me like what happened to my very first gng mid drive. I see potential on the design and the price is just right too. right now it's operating as it should with the new controller and the old style freewheeling crank set. almost $200 in upgrades already.... sigh....
Top

might build another bike using this kit or if My GNG totally crapped out on me like what happened to my very first gng mid drive. I see potential on the design and the price is just right too. right now it's operating as it should with the new controller and the old style freewheeling crank set. almost $200 in upgrades already.... sigh....

potentially the cyclone is cheaper after all the upgrades on the GNG..... it comes with an ISIS bb and crankset already....
Top

I feel like this kit has a lot of potential. With the right after market parts to fix some small problems it could be great. My only worry is the gears. Are they easy to replace? Are they cheap?
Top

from the photo of the gear box above, it should be pretty easy to replace them. they are held by circlips so you'll need circlip pliers. The gears replacement I would ask cyclone about availability. The gear box is used on many motor configuration that you can find on aliexpress as well so it's should not be a special/proprietary part just for this kit. you could also do what the guys with bafang geared hubs to prevent their gears from stripping. Replace one planet gear with a steel one. you do need to get someone to cut you a steel gear. memory serves right, there are members here that offer such service.
Top

here is a the thread about replacing one of the nylon planetary gear with steel one to prevent stripping. http://endless-sphere.com/forums/viewto ... etary+gear
Top

here is an example of another similar motor with the same gear box. http://www.aliexpress.com/store/product ... 22872.html
Top

and even GNG use a similar looking gear box on their trike conversion kits. http://www.gngebike.com/36v500w-brushed
Top

As noted above, I have this kit installed on a late-90s hard tail mtb. I can't say for sure that the plastic gears will have a long service life, but I can say that they have handled over 2500 watts of power with my fat a$$ with no problem. I recently opened up the gearbox to see how well it was lubricated and the gears had only minor noticeable wear after about 550 miles. I suspect they would be good for a few thousand miles and then could be replaced with the nylon gears readily available.

I'm still a little annoyed with the amount of noise under acceleration. I may buy the nylon gears and experiment with different lubes to see if it helps. Also, I had the drive chain pop off again during a very hard run from a dead stop - which was entirely due to the flexing of the mounts. I can take a video if anyone wants to see the amount of flex I'm seeing.
Fortunately, I recently built a CNC machine, so I hope to soon design a better mounting system.

On the positive side, I'm still impressed at the amount of power this motor can handle with no overheating. I downloaded a Powerlog6s log file from my ride yesterday and had burned through 7.4ah with long periods of 2400+watt draw and the motor was only about 95F when I ended the run.
Top
Post Reply
3576 posts