The difference with the TongSheng TSDZ2 is higher torque(90Nm), more quiet(<52dB) and bigger nylon gear. 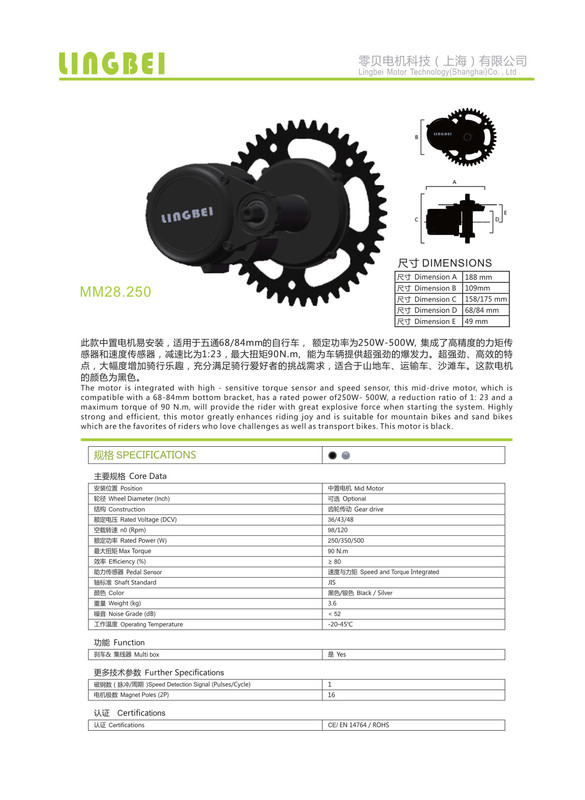 TongSheng on the left, Lingbei on the right. 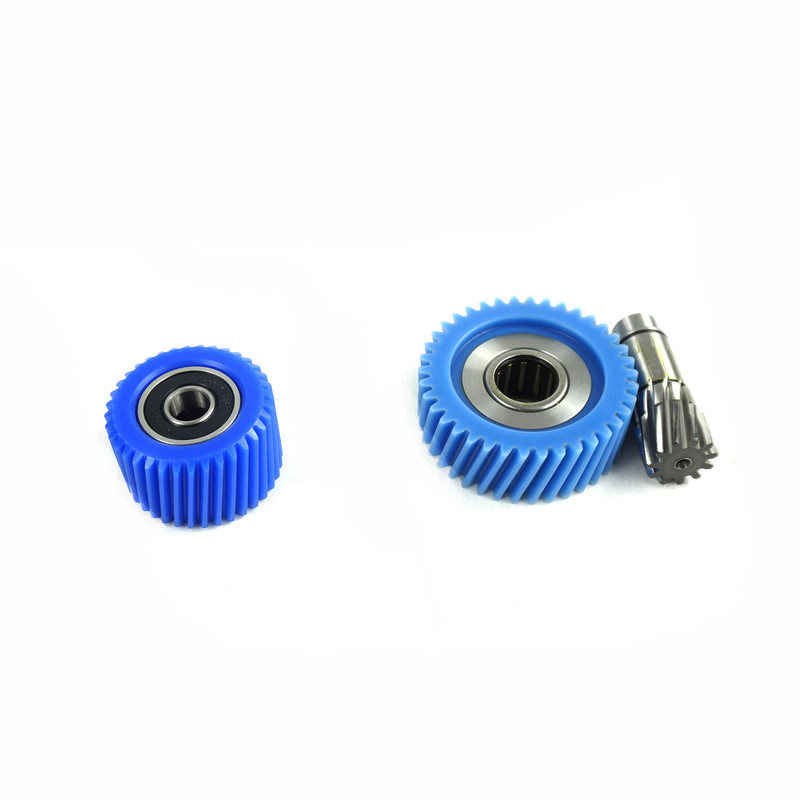 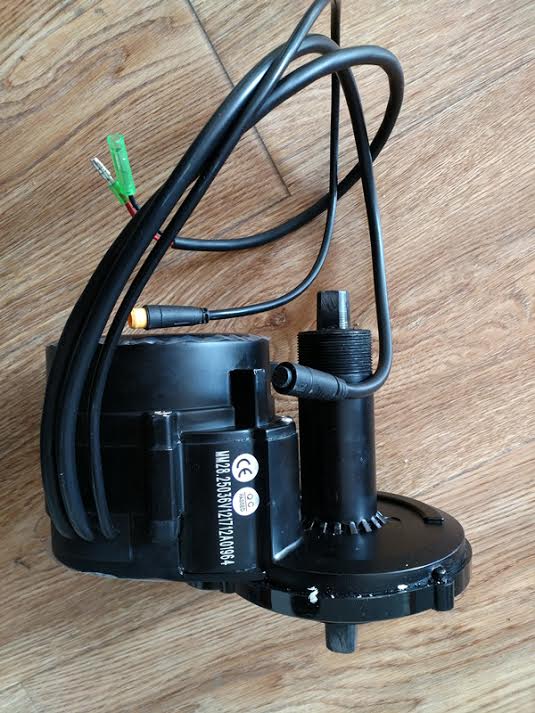 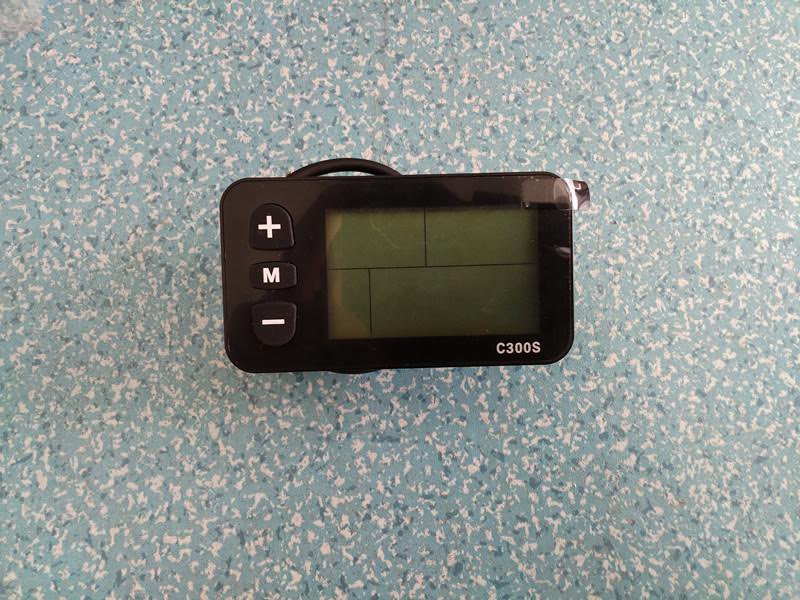 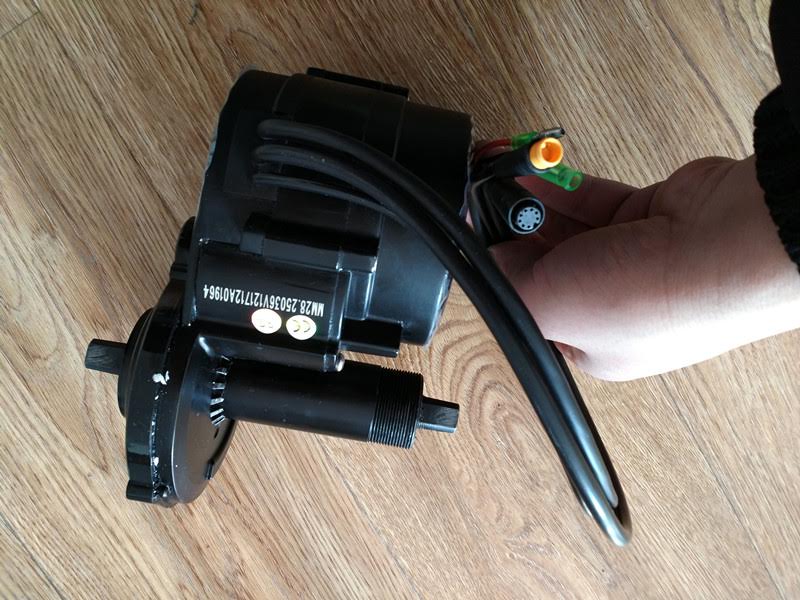 I have ordered this motor in 48V 500Watt version. Should take about 2 weeks for delivery.
When I get it I'll open it so we can take a look at the electronics and see if we can make a combined effort with the TSDZ flexible open firmware @casainho is working on.
Top

Where did you order it? Can you measure can it be fitted to bikes with 73mm BB.
http://lingbeimotor.com/a/products/p1/14.html
Here they say it is compatible with 68-84mm bottom brackets.
Canyon Torque DHX + Cyc X1 Pro
Top

I ordered it from OKFeet/Green Pedel on Aliexpress. 390$ including shipping for the 48V500W version.
When it arrives I'll measure it.

I told them to check this forum, maybe they can answer some of our questions here as well.
Top

They need to clone the bbshd in a torque sensitive version. That would be awesome.
Top

I think i found another seller of this motor. This time it's called outrider OR01M1.

Looks like it is only the C300 display, not the C600
which means
No throttle ?

Not yet. I will receive it today!

Depends on the seller. I bought the C600 with throttle. They have different displays available when you contact them.


By the way, they got new stock for this motor.
When I get it today I will make pictures and hopefully some pictures of the inside as well.
Top

Got the motor and assembled it already on the bike. Really simple!

However, I have some mixed feelings about how it operates. This motor is really silent. Very hard to hear it.
But the power assist levels are just.. strange. I have the feeling I'm driving a bafang BBS motor without torque sensor.

When I'm in high gear and start to peddle, the support doesn't feel natural. The motor is so strong that it pulls you quickly to 15km/hr. When you start to peddle from stand still, it takes about 2 seconds for the motor to kick in, you'll notice it as it starts to pull the bike.

This happens most noticeably on PAS level 2 to 5. Every PAS level about 2 feels as the motor is pulling you and at PAS level 3 you don't need to apply any force to the bike for it to go.

I'm wondering if it really has/uses torque sensing. Or maybe I'm at a too high gear for it to work properly.

By the way, it's just too easy to drive 45km/hr without any effort lol.
Top

So you need to open the motor to inspect for a torque sensor. Please try to take pictures of the motor controller

casainho wrote: ↑
May 25 2018 8:17am
So you need to open the motor to inspect for a torque sensor. Please try to take pictures of the motor controller

Yeah, I'm afraid it is time to open the motor.

This feels like just another cadence sensing mid drive. I feel no feedback when I step on the pedals really hard.
Top

casainho wrote: ↑
May 25 2018 8:17am
So you need to open the motor to inspect for a torque sensor. Please try to take pictures of the motor controller

Yeah, I'm afraid it is time to open the motor.

This feels like just another cadence sensing mid drive. I feel no feedback when I step on the pedals really hard.

Well, I remember that KT motor controllers are selling as "torque simulation" using only the PAS (although there are also specific versions of KT controllers for real torque sensors). Let's see if is or not the case of this Lingbei....
- TSDZ2 and OpenSource EV display: 128x64 OLED display, easy to build as DIY, Bluetooth and ANT, OTA wireless updates, easy to repair and customize for other EVs.
- TSDZ2 FAQ: issues and repairs, etc
- TSDZ2 OpenSource firmware

Well, it was a challenge to open it up. The whole case was sealed with liquid gasket. 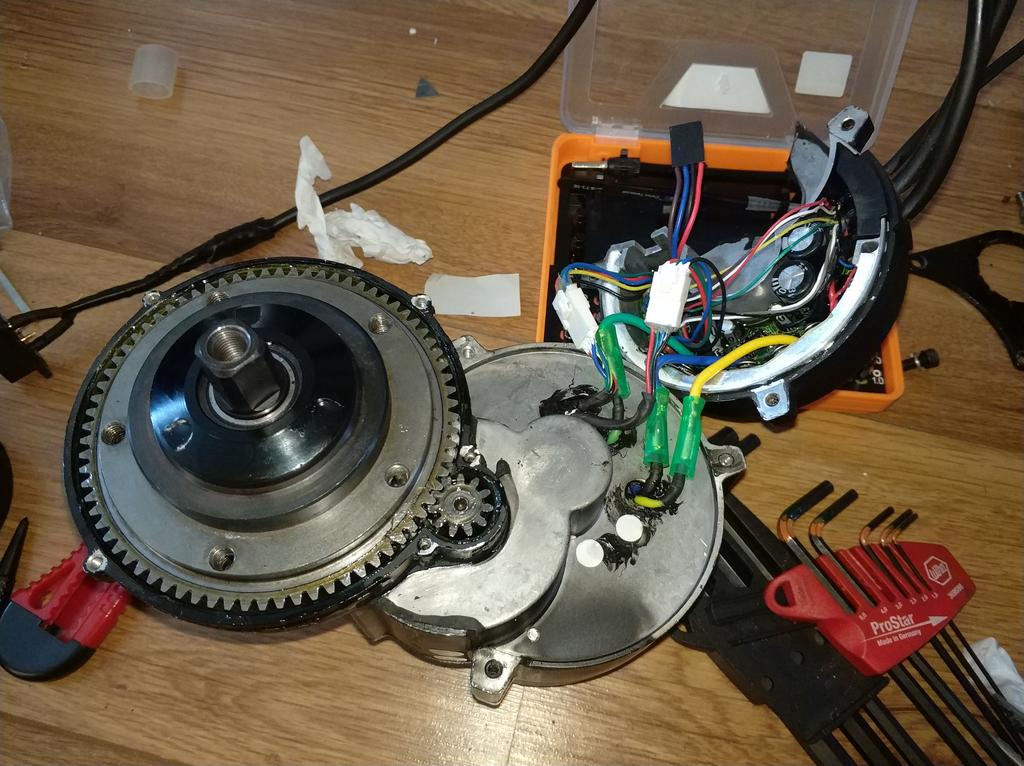 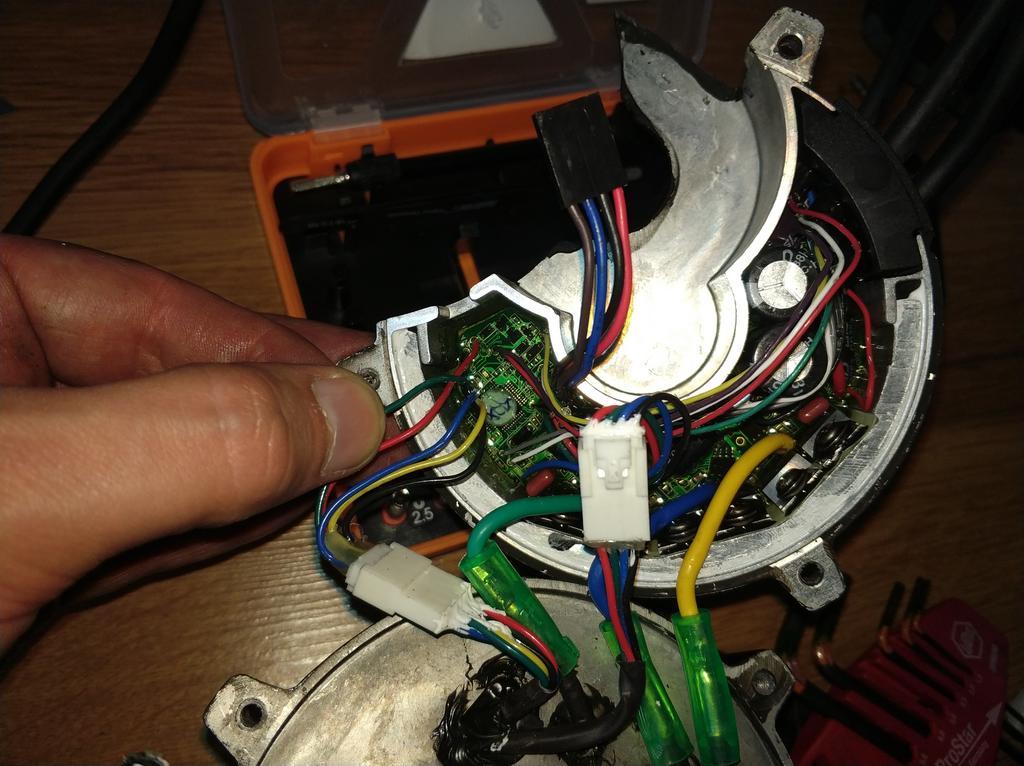 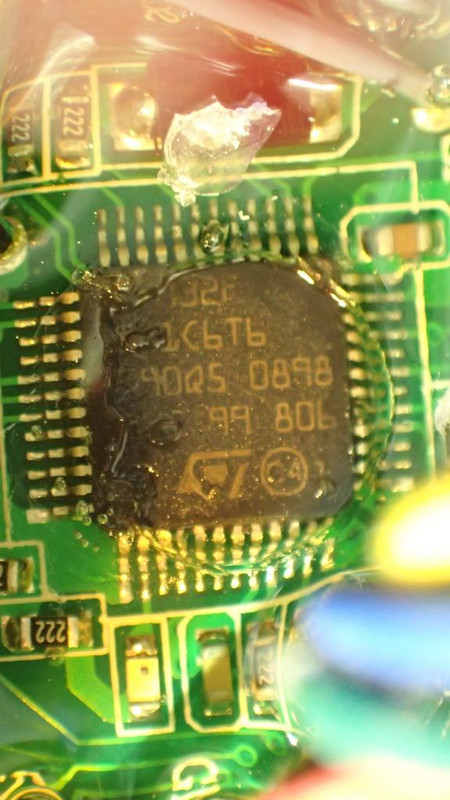 What does this learn us?

- The mechanical design is very similar to a BBS01 controller
- They use a STM32F101C6T6 microcontroller(weeee!!)
- There is a 4 pin programming cable
- There are two cables going into the motor. One 5 pin, one 4 pin. So it really is a PAS + torque sensor?

The thumb throttle they use is the same as bafang.

So if there is a torque sensor, then the PAS is really too strong with the 500 Watt motor and gear ratio I use.

I think I need a special wrench to remove the big gear.
Top

About that STM32, great they are using it as it is programmable and very popular

It runs at 36MHz and has only 32kbytes flash. The KT controllers and TSDZ2 use STM8 at 16MHz and also with 32kbytes flash.
I think they are doing just the same as STM8 does, because although that STM32 is faster, 32 bits, etc the limitation is on the available flash memory.

STM32 with 64kbytes or more could be nice maybe to add sensorless algorithm and/or higher PWM frequency to have motor rotating faster. I guess that can be an advantage of that controller but still, I bet they are using the 16kHz frequency and so the limit should be near of 550 ERPS for the motor (this is near the 4000 RPM of TSDZ2 motor).
- TSDZ2 and OpenSource EV display: 128x64 OLED display, easy to build as DIY, Bluetooth and ANT, OTA wireless updates, easy to repair and customize for other EVs.
- TSDZ2 FAQ: issues and repairs, etc
- TSDZ2 OpenSource firmware

They advertise the STM32F101 as very suitable for sensorless FOC and have quite some info on it on how efficient it is, so this might be a slight different control than in the STM8.

I don't have spares and need the bike next week so I'm not going to hang the controller on my scope.

I asked the supplier if the firmware can be upgraded and the issues I'm having with the motor control. Maybe they have software similar to bafang to change all the motor settings. Would be cool

Anyone got a clue what error code 24 might be?
When I turn the display on it starts to blink after a few seconds.

The large gear is helt in place with what seems to be a nut that needs a three point wrench. I don't have it.

The supplier again confirmed it is a torque and speed motor. However they set 60% speed and 40% torque because some customers complained about the TSDZ2 being too much labour intensive..

I still have the error 24, they offer me to send a new 4 way cable but I'm not sure if that is the cause of the error? I can still drive the bike and everything seems functional except that it blinks an error.

The motor is really silent when operating correctly. However, after removing the motor and assembling it again on the bike I have this weird vibration and I have no idea where it comes from. Not even sure if it's coming from the motor. It isn't always there.

Does this mean that the motor could be programmed to weigh the PAS and torque sensor differently? I'd consider this motor if so, because I would prefer it to be pure torque, or maybe pure torque for the first 4 levels, then cadence + torque in level 5. I want to be superman!

Does this mean that the motor could be programmed to weigh the PAS and torque sensor differently? I'd consider this motor if so, because I would prefer it to be pure torque, or maybe pure torque for the first 4 levels, then cadence + torque in level 5. I want to be superman!

Absolutely. It is now 60% PAS and 40% torque. In the beginning I thought the torque sensor didn't work but it does work, although I think it is badly balanced for my bike.

The PAS settings seem to set the cadence speed. Higher PAS = faster supported rotation. That's basically how the bafang motors work. However, the motor only starts to push when you put force on the pedals -unlike bafang- just rotating the pedals isn't enough and that's where the torque sensor kicks in. This gives(to my impression) better control over the bike, cause sometimes you just want to pedal without going faster(for example when you're slowing down and want to switch gears when you have a derailleur).

I would like to see a different balance. I find the cadence/pedal speed a little bit too fast for my liking on every setting.

Something like:
1 - 3 = pure torque -> Great when cycling with other people who don't have a motor cause you can adapt your cadence speed to them.
and 4-5 = PAS + torque -> For when you are alone and want to drive fast(ie. home to work). Still having better control over the bike than pure PAS. I do like this mode in some way as it just brings you to a semi fixed speed and is not as labour intensive as torque only. If for example you only set the torque sensitivity very high without cadence, you are constantly being pushed and your bike speed varies. PAS+Torque for commuting might be best of both worlds.

When everything works I can really recommend this motor. It's absolutely dead silent! The designers used bigger gears and all gears are helix(unlike TSDZ2). I cycled with people with other motors such as Bosch and Yamaha and you just couldn't hear this lingbei motor. The yamaha being clearly the most loud one.

The 500Watt, 48Volt motor I have pushed me to 45km/hr and 40km/hr up hill with some headwind without much effort. Pretty incredible.
Top

Thanks for sharing, great info!
Top

Did another test ride.. This beast is awesome already but things can still be optimised. The supplier OKFeet is responding very fast and cooperative so I can definitely recommend him.
Top

I can now confirm it indeed has a torque sensor. There is a three hall-sensor cable going to the motor for cadence and another 4 pin cable is going up to the bottom bracket. Tongsheng only uses 2 wires if I'm not mistaken so this could be a different torque sensor.

The blue gear is bigger as well as the gear coming out of the motor. The motor has 16 magnets. All gear are helix.

Programming cable is on the way so we can take a look at the firmware.

The motor assembly has much larger ground clearance than the TSDZ2. It sits close to the diagonal tube of the frame opposed to the TSDZ2 which is mounted below the bottom bracket.