galp wrote: ↑
Apr 13 2019 1:42am
Fully charged 20S lithium is 84V. So 16V margin. You have to understand that difference between saying 15V and 18V is insignificant for this case. For example one motor could produce 10V spikes and a different one 20V spikes at same phase current. It's really hard to know how much is enough but 2V difference for sure won't save you at 84V input voltage.

I don't know anybody that charges LIPO or LION to 4.2v per cell. I sure don't. If you look at electric car makers such as Tesla, they don't either...more like 3.9v. Lithium at near full voltage has a non-linear zone where charge voltage drops off quickly until you get into the linear zone at around 4.0v. Charging above 4.1v per cell shortens the cells life span and does not offer any significant amount of extra charge. Same for the low end. There's not much use going below 3.4v per cell and to use them below this just shortens the life span of the cell.

ElectricGod wrote: ↑
Apr 22 2019 5:14pm
AKA good components hold up to over watting and abuse better than cheap parts.

There are still some "gotchas" behind this. Yes reputable semiconductor companies often derate their devices to ensure reliability over full temp range or other environment conditions. Yes you may be able to exceed Vmax by X volts at 25C ambient but that may not be the case at 100C. You also may very well decrease the life span of the device by exceeding it's max parameters.

However we can often get away with exceeding the max parameters of devices for short durations. It's you're call as an engineer/DIYer/user on how much you want to push that limit.

If by "short duration's" you mean years...such as in CREE LED's, then I agree. A typical real CREE LED is rated for something like 10 years of life. Admittedly I don't have 10 years on any LED I over watt, but I definitely have been over watting them for more than 1 year and that with regular use for an hour straight or more. When I over watt an LED, I run it continuously for an hour straight before I consider it reliable. What's more, I'm pushing the XHP70.2 to 7v and 9 amps, not 8v and 15 amps like I've seen documented with good reliability.

I'm not trying to be argumentative here, but my suspicion is that this is also true for good mosfets and that they will hold up to a bit of over voltage situations just fine. Heat is the biggest semi-conductor killer so don't let them get too hot. Of course pushing parts well beyond their limits is likely to be catastrophic..like my 36v mosfet at 48v showed. It never had a chance to get hot as it failed immediately. These comments are not in any way an attempt to say "Let's run at well over specs all the time", but rather "It can be done to some extent and be done reliably." Legit CREE LED's are proof of this.

I know lots of people that "just use ready made controllers" and have no idea what the parts inside do. For those folks, just stay within specs. For people like me that regularly get 5-6kw and more out of 12 fet controllers, well this isn't really a big concern. I'll happily push my controllers and "risk" the possibility of a blown mosfet. At 82v and 6kw is 73 battery amps. At 66v and 6kw is 90 battery amps. Phase amps is obviously MUCH higher and I usually have that set to 130...or peaks of nearly 11kw in the phases of a 12 fet controller. So far...several controllers later...no blown mosfets...as long as the controller does not get too warm.
XB-502: viewtopic.php?f=10&t=83302&p=1222730#p1222730

It may be easy for someone to assume that one charges LIPO/LION cells to 4.2V. Datasheets often state this to be the max charging voltage like for LG HG2 cells in the linked datasheet. Doing this however has its disadvantages that you have pointed out. I'm just highlighting how some people could derive max battery voltage based on series cell count and datasheet specs. Heck even I do this for my new controllers being rated for 20S(84V). I wouldn't say charging to 4.2V is unrealistic, just disadvantageous.
Top

I charge to 4.35V/cell if I think it's questionable if I've got enough energy to make the ride, or at the racetrack where every extra watt of output is precious.
For a normal ride, I charge to 4.05V/cell. I would still want a controller that supports charging to 4.35V/cell though.
Each carcinogen vapor exposure includes a dice roll for cancer.

Each mutagen vapor exposure includes a dice roll for reproductive genetic defects in your children.

Each engine start sprays them into a shared atmosphere which includes beings not offered an opportunity to consent accepting these cancer experiences and defective genetics life experiences.

Every post is a free gift to the collective of minds composing the living bleeding edge of LEV development on our spaceship.
Top

I charge my 20S battery to 84V but sometimes the charger charges to 83V or 82V. I don't know what it depends on. It's most likely temperature and degradation of chinesium resistors inside my charger, so you never really know.

Wonderful! Can't wait to review these changes later today. I like the integrated 12V supply. Keep up the good work! It's makes doing my spin-off of this easier

liveforphysics wrote: ↑
Apr 23 2019 1:28pm
I charge to 4.35V/cell if I think it's questionable if I've got enough energy to make the ride, or at the racetrack where every extra watt of output is precious.
For a normal ride, I charge to 4.05V/cell. I would still want a controller that supports charging to 4.35V/cell though.

I guess you are using hi voltage LIPO maybe?

Of course for racing, you probably are not concerned about longevity of the pack. Like you said every watt is precious! A somewhat old pack will have reduced capacity and you don't want that. This is probably a very different use case than most people that buy or make a pack for long term use. For folks not racing, lengthening the life expectancy of the pack is the more important factor. As a result, charging and discharging more conservatively makes the packs life span significantly better.

I am reading with huge interests yours and shamans posts. These controllers are what i am(and a bunch of other users) are looking for.

So please make a paypal link and i am more than happy to back you up! Hope i can get my hands on one of the first batch.

Thanks for sharing and making it open source, even if i am not able to make one my self

I'm slowly making progress. Power stage routing is more or less finished. 12V DC/DC is halfway there. What's left to do it layout and route logic. There's plenty of space so it shouldn't be an issue.

Final board dimensions are set at 231x67 mm. I'll also have to find an aluminum housing to fit this thing inside. It should have internal dimensions at least 80 x 240 x 40 mm (WxDxH). Any recommendations?

If you want to donate, you can use this link: https://paypal.me/GalPavlin 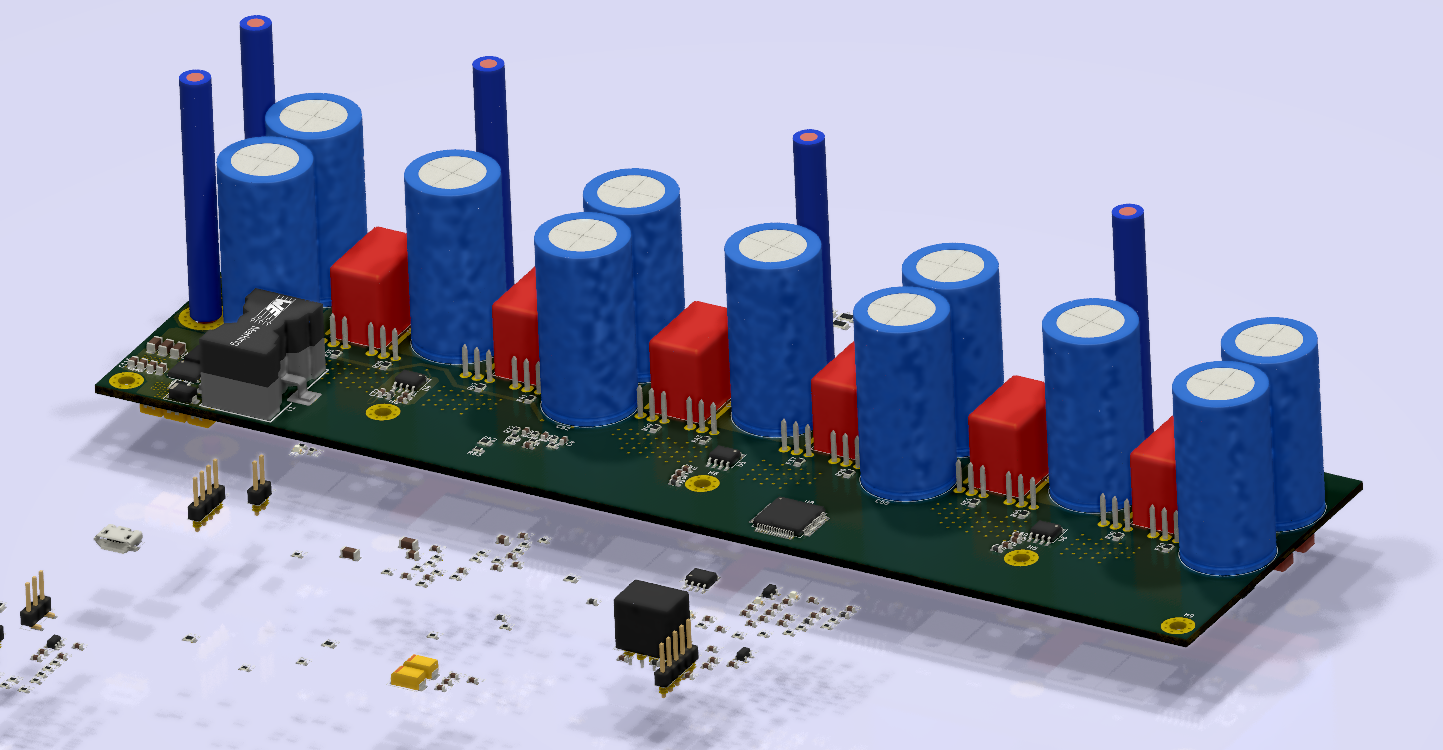 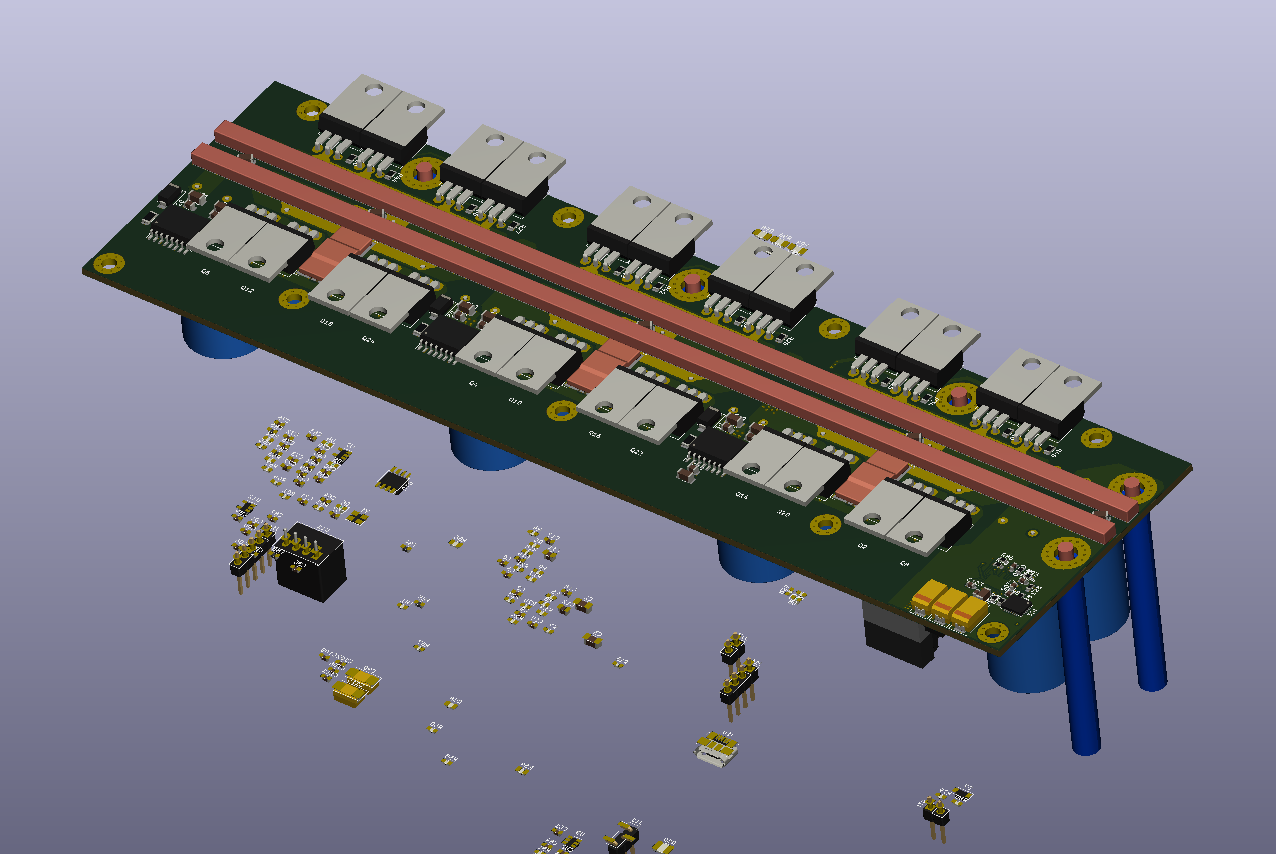 Are you running out of funds to finish this controller?

Maybe you are looking for some early buy-in?

Obviously there is interest in seeing this project come too completion. And that can be hard if you are on a budget.

What Are you proposing to us so it's compelling that we donate?

I'm not against financially helping you out, but I'm wondering what I should expect for my financial assistance?

Nah, it is in my interest to finish this without any external funds. Someone asked for a donate link and that's it.

There are many options of extruded aluminum enclosures on AliExpress. The vendor from the link below states that they can make the enclosures to any length you want. Makes sense since they are extrusions. I'm sure better ones can be found but this one is simple and cheap.
https://www.aliexpress.com/item/3236697 ... cb07hEvktd

Keep up the good work!
Top

Haha thanks, shaman. It will buy me 2 six packs.

Power stage is designed in a way to enable different system voltage/currents with the same PCB.

To get higher voltage / lower phase current you need to find:

I simulated my 12V DC/DC design and results are promising. 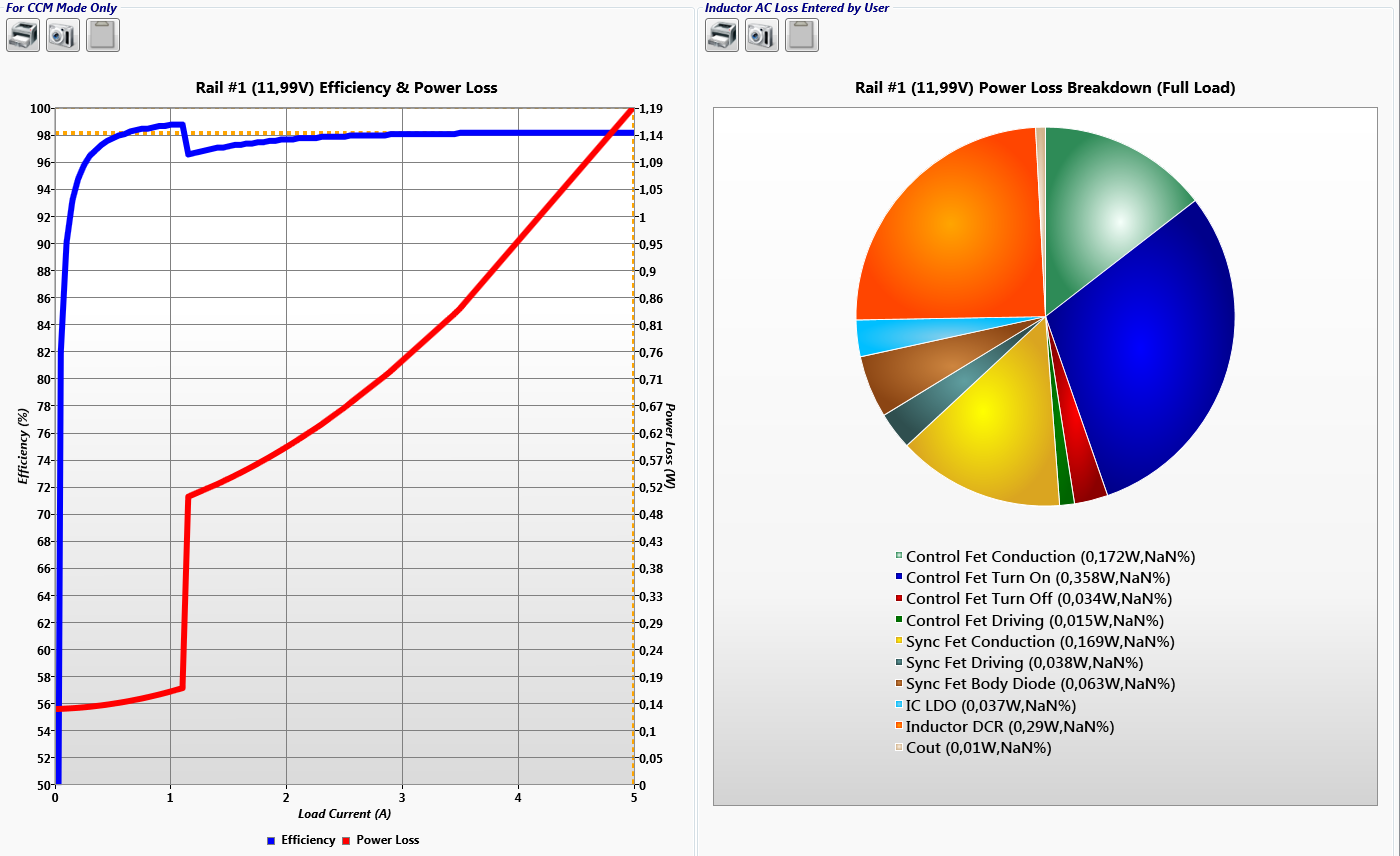 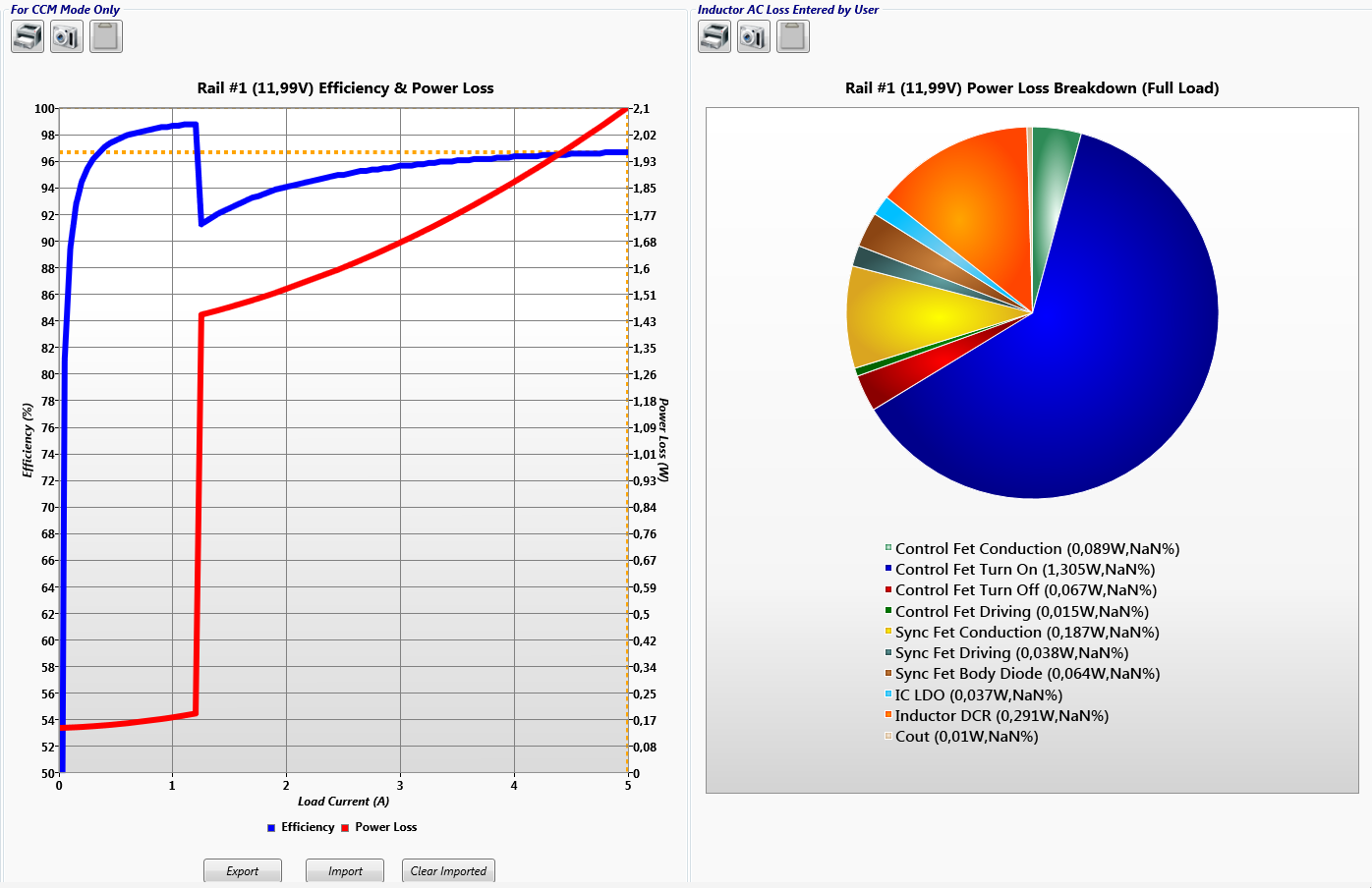 Good to see you are still working on this! Looks like the DC/DC converter has good light-load efficiency.
Top

galp wrote: ↑
Jun 23 2019 5:00am
Power stage is designed in a way to enable different system voltage/currents with the same PCB.

To get higher voltage / lower phase current you need to find:


Caps are easy to find.

I'll look into different power stage configurations but first I'll finish PCB design. I had university finals for last month and a half so this project was on hold. Anyway, I still have to pass last 2 exams before you can call me an engineer.

This is very exciting! The 100V version will be perfect for a QS 3000W midmotor project in my near future. Do you have any thoughts on the possible continuous capabilities of the circuit board itself? The FDPF2D3N10C or IPP023N10N5 (100V 2.3m) looks like they would work very well with 18 or 20s and have the possibility of 400A+ peak phase current and maybe even 200A+ continuous, though of course the price of the FETs would be higher than the 135V FETs.
Top

I'm planning on doing 400A phase peaks with IRF135B201. I did around 100A continuous phase current in 12 fet controller with PB044N15N5 and moderate cooling. TO-220s are much easier to cool. Final continuous performance will depend mainly on cooling of the device. Temperature difference between mosfet case and device housing is estimated at 30K @400A phase current, 15K @200A phase current. Mosfets go up to around 80°C before any derating (100A per fet) so keeping case under 50°C (for 400A, 270W losses) could be a challenge in summer heat. Keeping it under 65°C with only quarter wasted power (70W) at 200A phase current seems more realistic. You also have to keep in mind that 200A phase current for more than 10 minutes in 30°C weather = melted QS205 even with hubsink. And keeping batteries cool at 200A is yet another problem...

I just finished routing. There are some finishing touches to be made but I think it will be ready soon. I plan on assembling first unit in the middle of next month. Before I can do any serious tests I'll have to double my ebike battery to get it to do 200A.

Headers on the picture are just the defualt footprint. Instead of them I'll solder JST cable assemblies directly to PCB. Something like this: https://i.imgur.com/J7Kzgfy.png

This is looking good! I can't wait to spin this design for TO-247 FETs. I want enough power for an electric cruiser motorcycle.
Top
Post Reply
144 posts